On the Wrong Side
Info Artworks Installation views 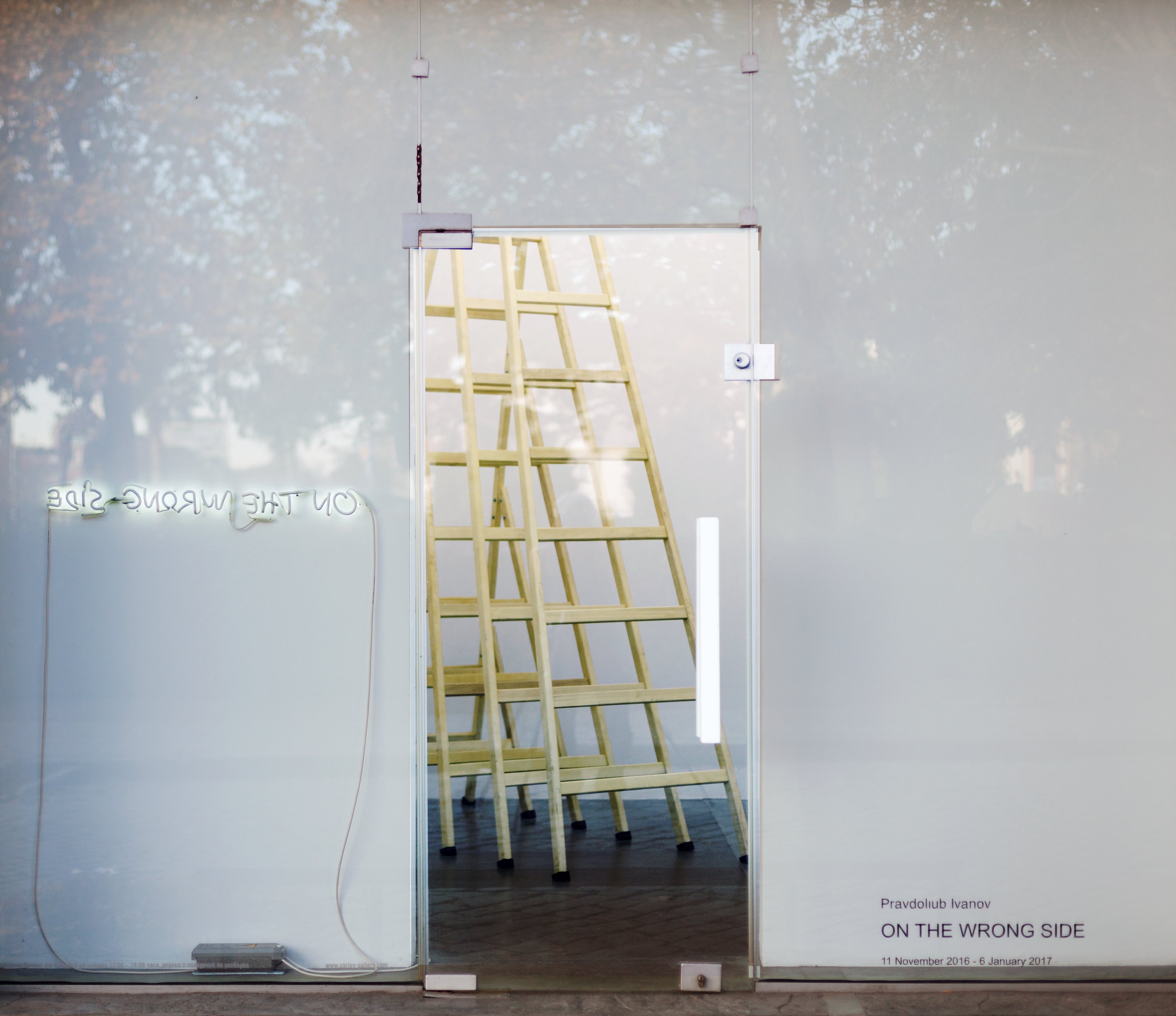 On the Wrong Side


Pravdoliub Ivanov’s project at Sariev Contemporary bears the title On the Wrong Side.

“I realize more and more,” Ivanov says about his show, “that when I think of social, political and global problems, conflicts and dangers, I am actually thinking of my own fears. The elements of this project do not add up to a single unambiguous theme; they are, rather, fragments born out of my personal anxieties and hopes. It’s why I aimed at creating a sense of discomfort in the exhibition experience.”

These fears are the by-products of a dismantled world where stereotypes such as East and West can no longer explain and exhaust our present.
Before we enter, we are met by a neon sign on the gallery’s façade: On the Wrong Side, a work bearing the title “You are…”. Although the viewer sees the inscription lit up against the wall, the actual letters are spelled out in reverse and facing backwards.
The object “The Ladder” is the perfect metaphor for what we ordinarily might call socio-political life. How far up the ladder you get depends on which path you choose to take. But is it really as simple as that? Might it be that the ladder’s very construction predetermines your ultimate position in the social hierarchy?
In another work, the artist’s traumatic memories are embodied in a communist-era slide projector that brutally thrusts, drill-like, into the gallery’s wall. In the 1970s and 80s, gadgets like these were used to screen fairy tales to children, as well as for educational and propaganda purposes. Here, the one-time “toy” has been turned into a powerful machine that can destroy thick walls and demolish systems. Or it could, were it not stuck high up the wall, its power cord too short to connect to the plug below… A piece of technology that was once formative for a whole generation is now useless and thoroughly bewildering to the following generations.

Two brilliant drawings, “Truths”, which seemingly plays on the Modernist heritage of the 20th century, and ‘’After Dürer”, which tinkers with other history of art concepts, are also part of the exhibition. Ivanov’s daring allusions to the past become part of the unintelligible language of the present.

Finally, in the video “Natural Fear”, the viewer can choose to see and “read” this short film with or without a sound track. The two experiences are so dramatically different that they have the potential to create two separate, diametrically opposed publics.


PRAVDOLIUB IVANOV was born in 1964 in Plovdiv. He graduated from the National Art Academy, Sofia, Bulgaria, where he is currently a lecturer. In 1995 he became a Founder Member of the Institute of Contemporary Art – Sofia. Pravdoliub Ivanov has a strong presence on the international art scene. In 2007, together with Ivan Moudov and Stefan Nikolaev he participated in Vessela Nozharova’s curatorial project “A Place You Have Never Been Before” – the Bulgarian official participation at the 52nd Venice Biennial. His works were also presented at the 4th Istanbul Biennial in 1995, Manifesta 3 in Ljubljana, Slovenia – 2003, at the 14th Sydney Biennial, Australia in 2004 and at the 4th Berlin Biennial in 2006. He has participated in big international shows such as: In the Gorges of the Balkans, Fridericianum Museum, Kassel, Germany; Blut & Honig, Zukunft ist am Balkan, Essl Collection, Vienna, Austria; Sport in Art, Museum of Contemporary Art in Krakow, Poland; Who killed the Painting?, Works from the Block Collection, Neues Museum Weserburg, Bremen, Germany; No New Thing Under the Sun, Royal Academy of Arts, London -2011; Sport in Art, Museum of Contemporary Art in Krakow, Poland - 2012; The Unanswered Question. İskele-2, TANAS and Neuer Berliner Kunstverein, Berlin – 2013; Heaven and Hell From magic carpets to drones, Villa Empain, Boghossian Foundation, Brussels - 2015; The Travellers, Zachęta-National Gallery of Art, Warsaw - 2016. Pravdoliub Ivanov’s works are part of collections such as: Sofia City Art Gallery, Kontakt Collection ERSTE Bank, Austria; European Investment Bank, Luxembourg; European Patent Office, Munich, Deutsche Bank Collection, Art Collection Telekom, Vehbi Koc Foundation, Istanbul and Tiroche DeLeon Collection & Art Vantage PCC Limited; private collections of René Block, Berlin, Dr. Heinz and Dr. Kühn, Vienna Austria; Nedko Solakov and Slava Nakovska, Sofia, Spas Roussev, Sofia, London . Pravdoliub's works have been reproduced in magazines such as Frieze, Flash Art, Kunstforum, Аrtforum etc., as well as in publications such as East Art Map and Show Time – The Most Influential Exhibitions of Contemporary Art. Since 2011 he has been represented by SARIEV Contemporary. 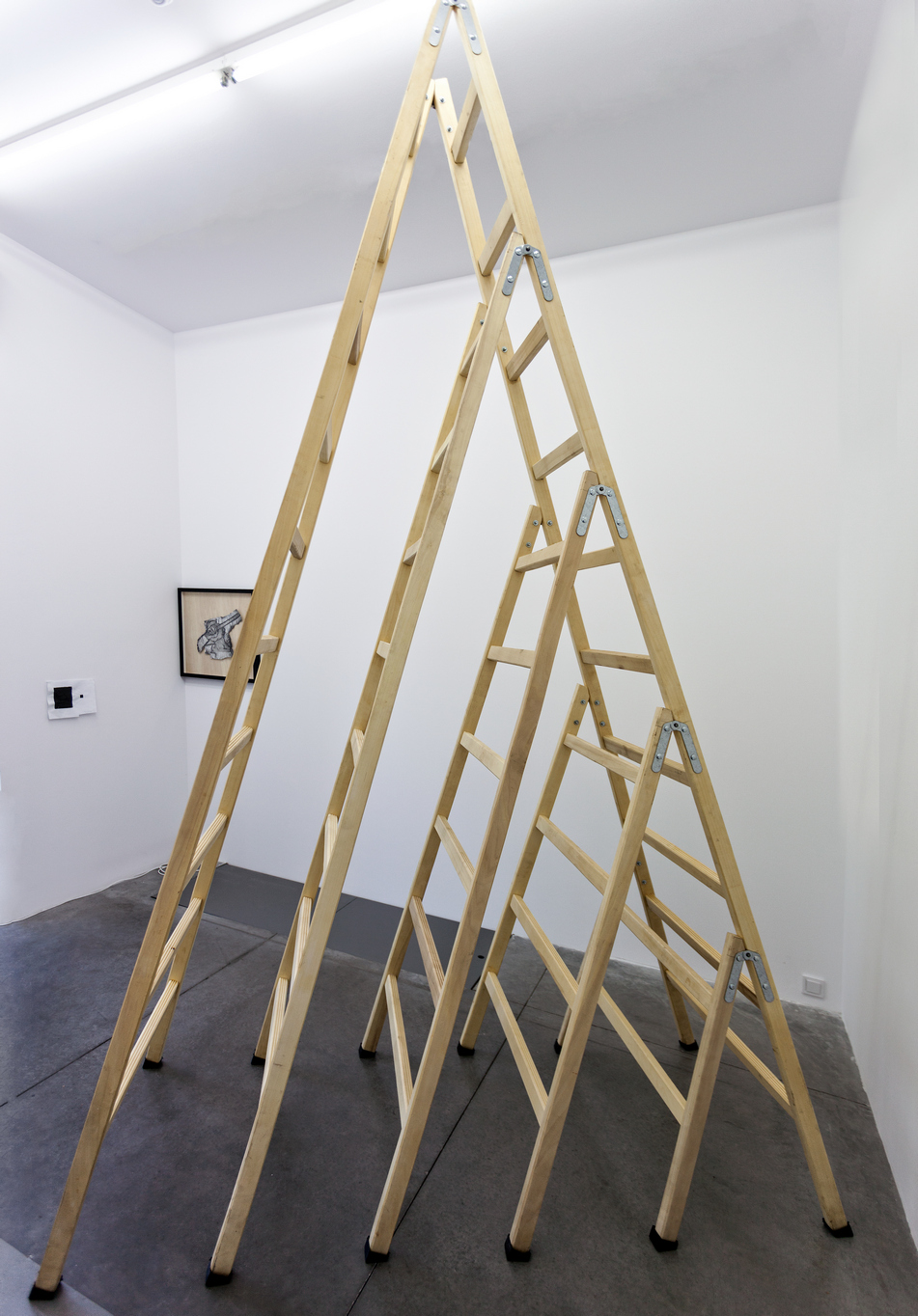 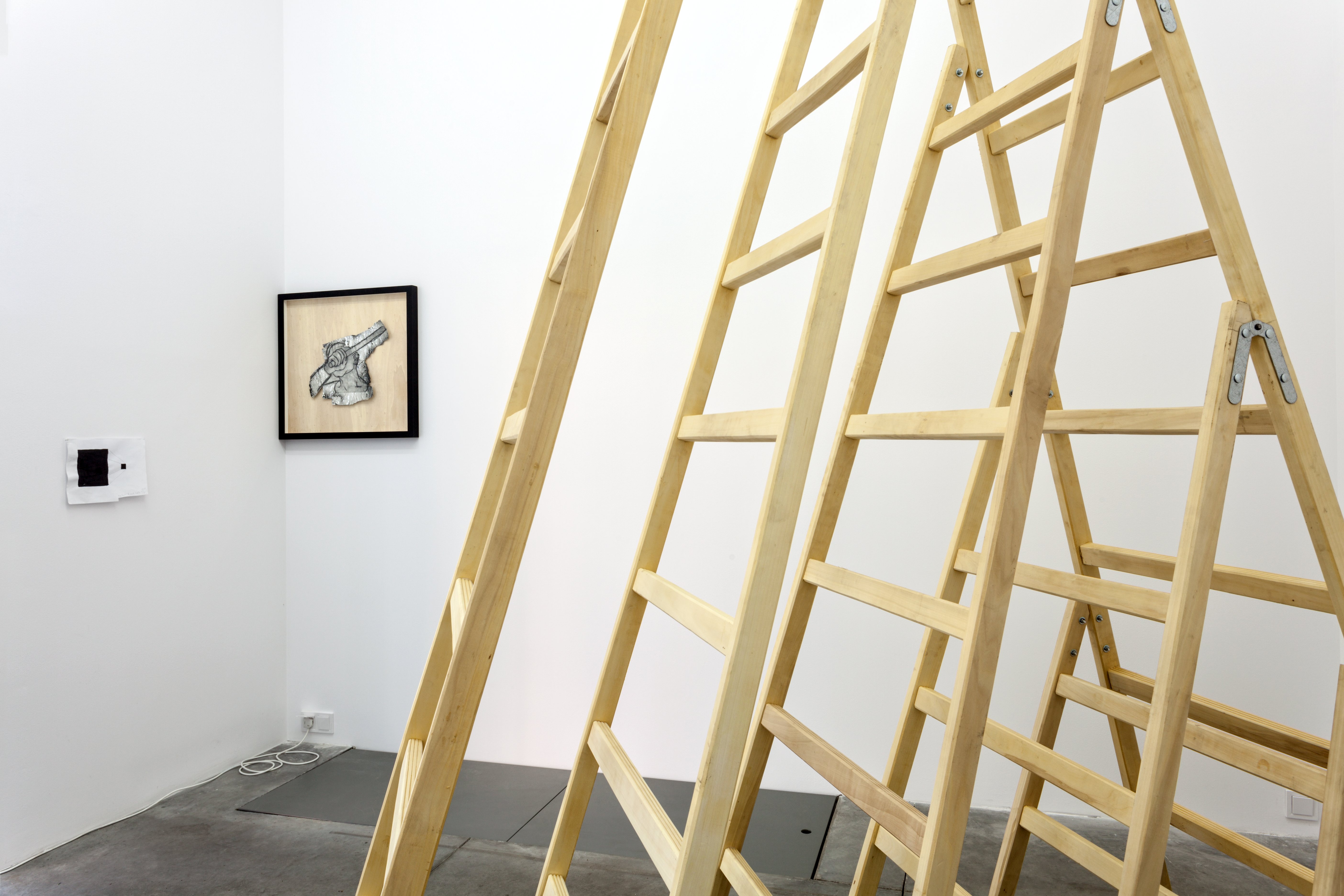 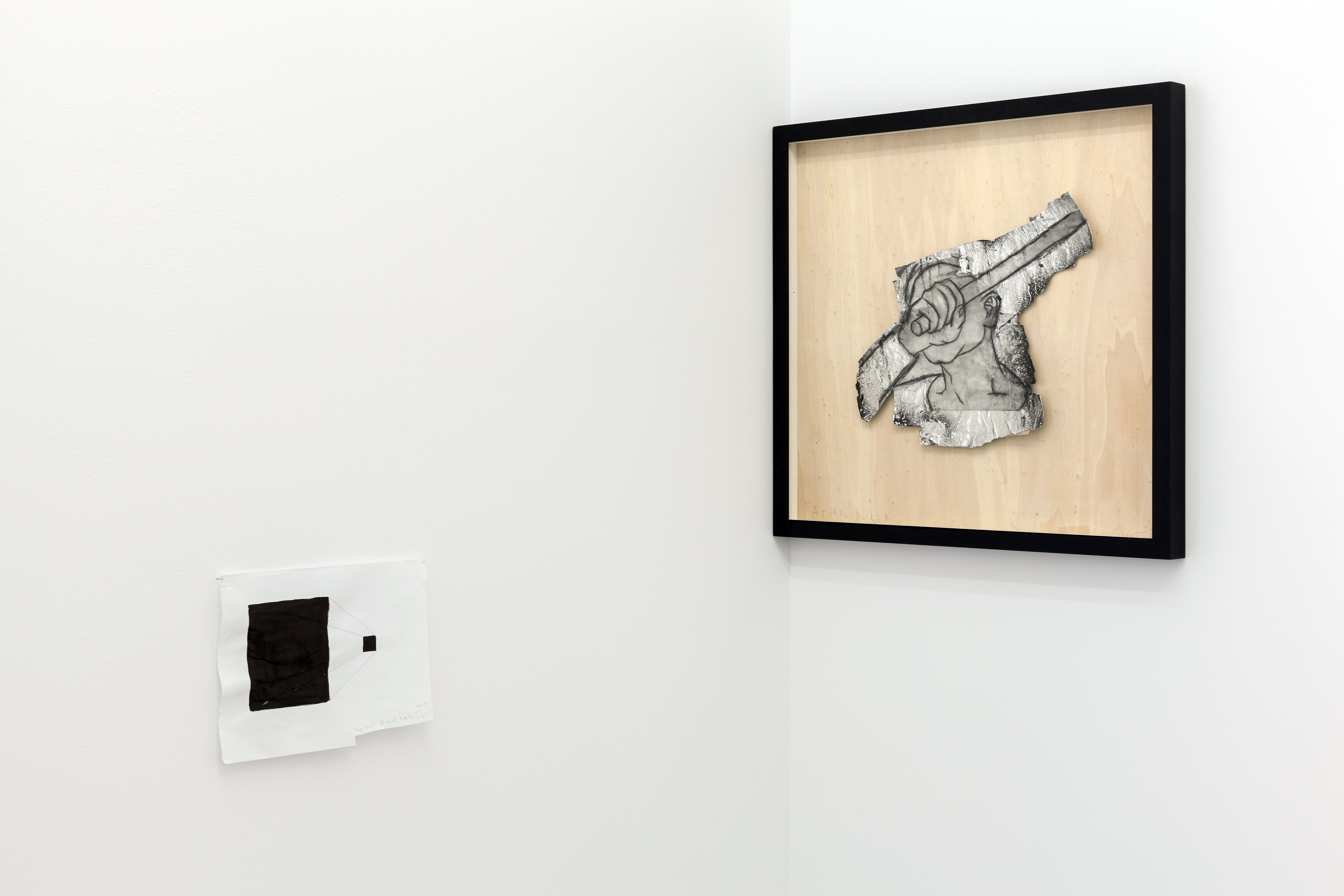 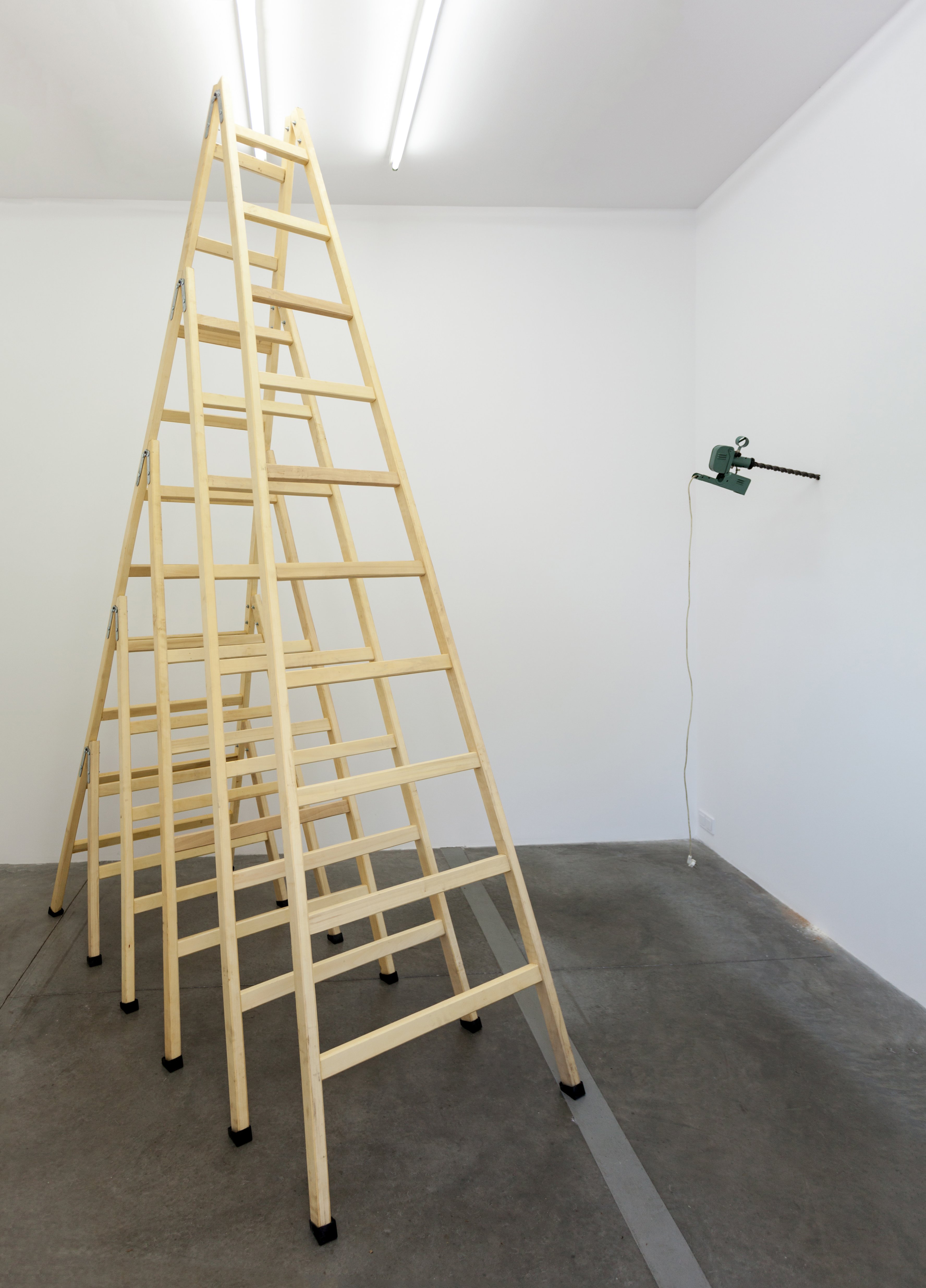 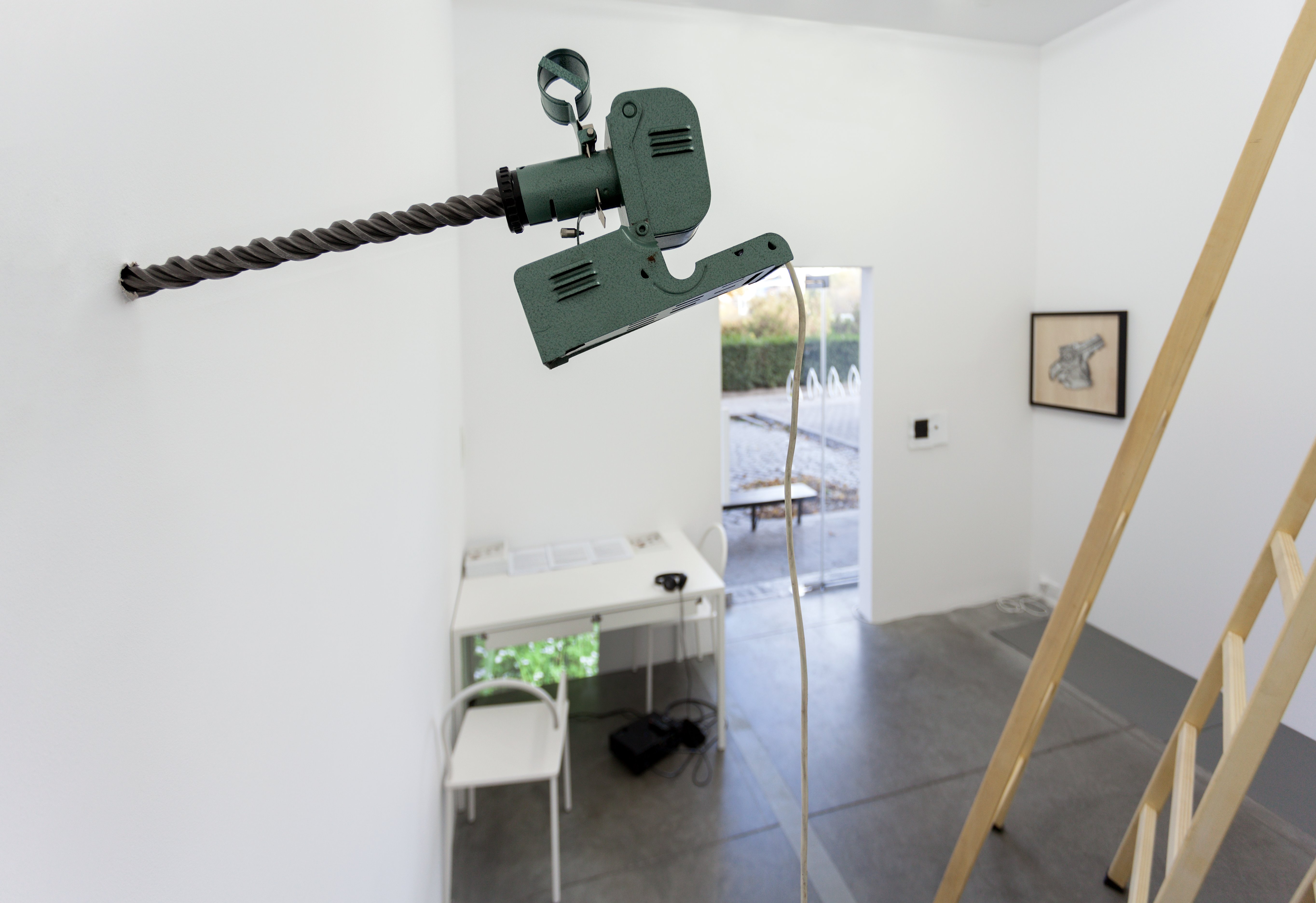 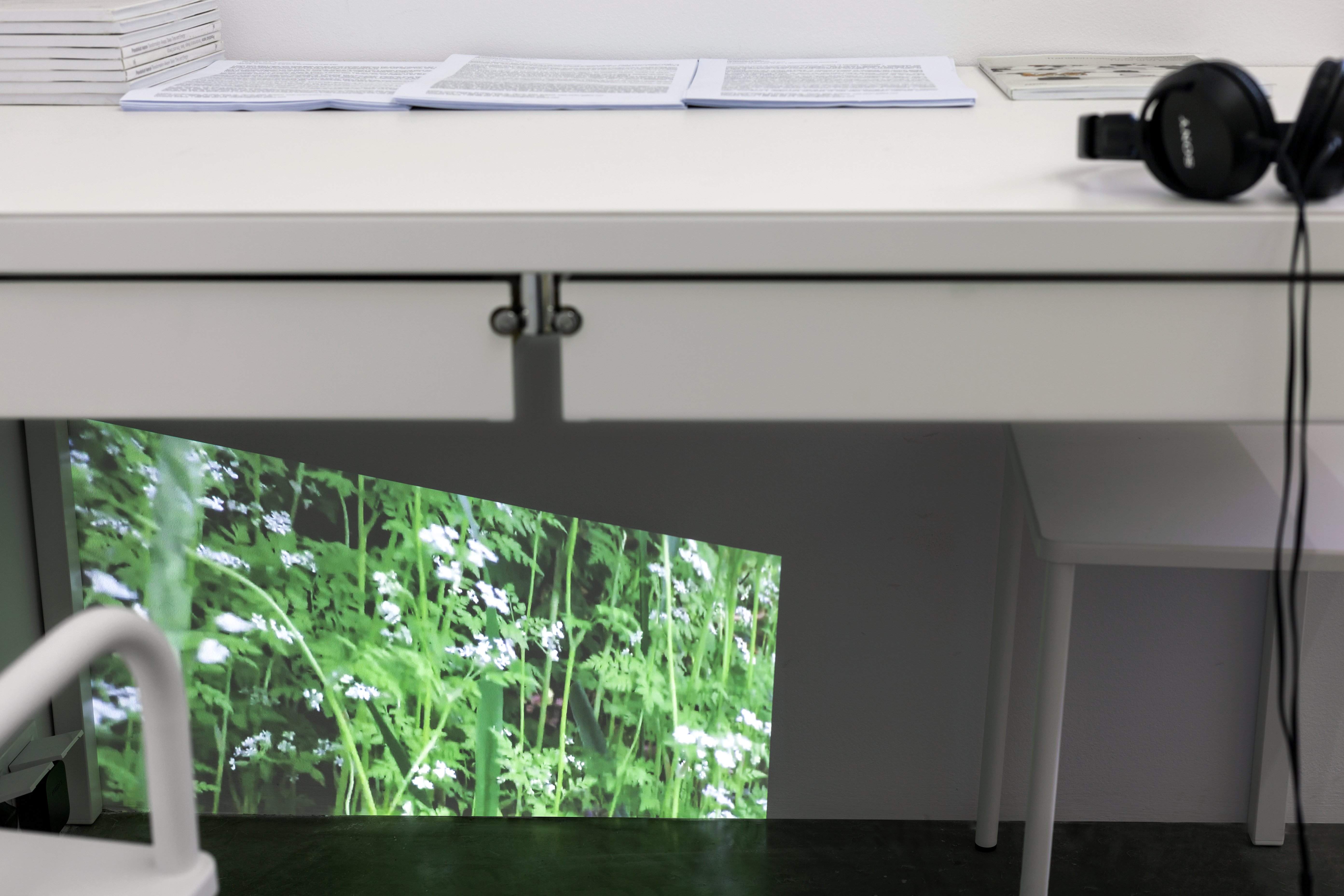 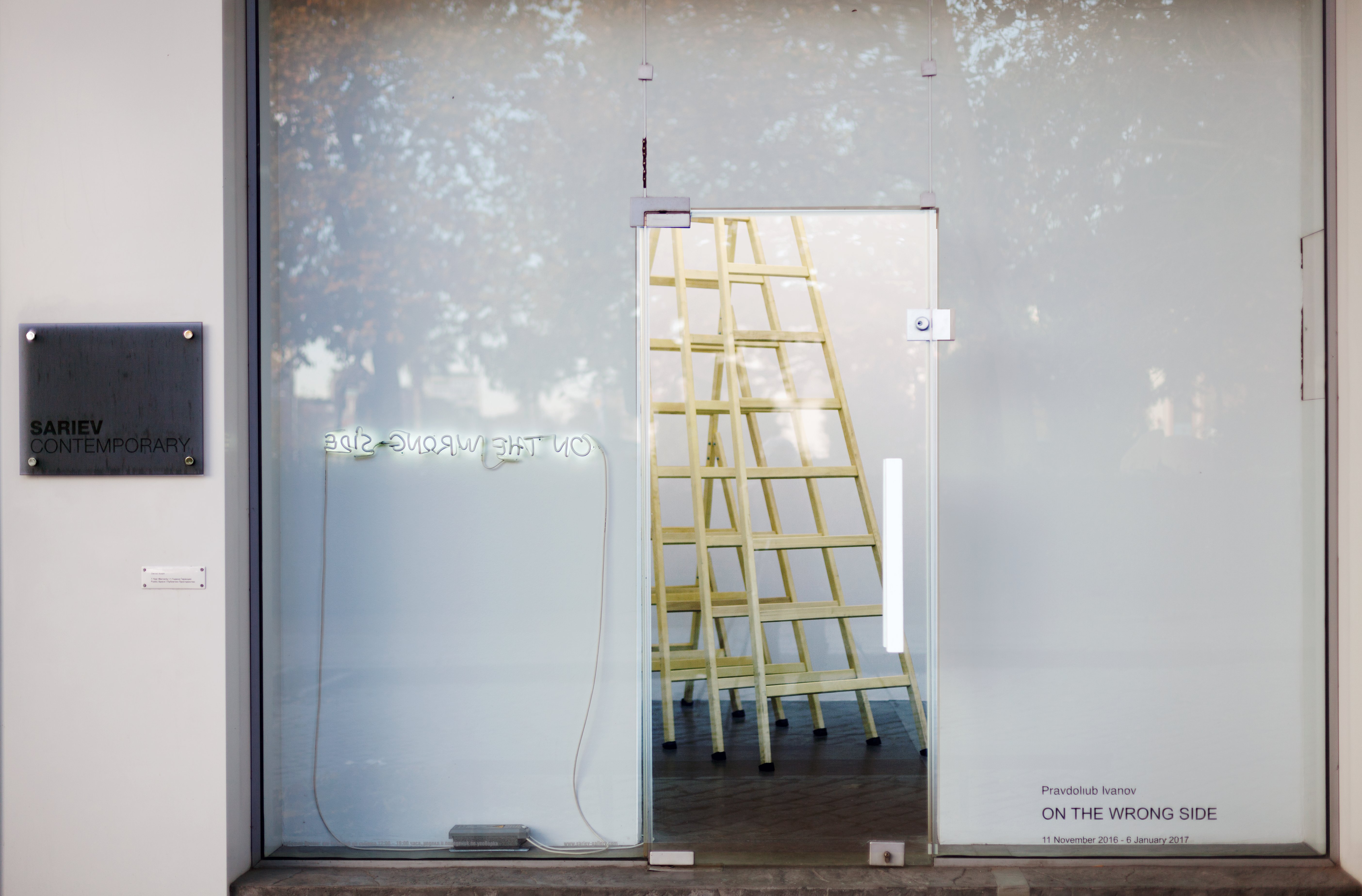