This Viewing Room is an introduction to Magia Naturalis and a meeting with the creators of this experimental environment, as well as the artists presented in Phase I.

Magia Natuiralis is an experimental field that incorporates artistic, philosophical and scientific practices and concepts in a shared space. The space is first and foremost the physical space of the Sariev gallery in Plovdiv and beyond it, its reflexive field or dimension extends to my philosophical laboratory, namely the blog Magia Naturalis… (Boyan Manchev)

Moving away from poeticising that has been divested of its creative power, Magia Naturalis will take on these questions, in all seriousness and on the level of their eccentricity, in order to elevate them to an experimental dimension: a dimension of the possibility of (creative) subjectivity beyond the bounds of the human. Magia Naturalis will therefore open up an experimental space of reflection where simulated possibilities of the unimaginable (forthcoming) nature and the unimaginable (forthcoming) art will be investigated. It is not a question about nature conceived as an ungraspable origin duly furnished as a museum herbarium – it is about nature as an ever forthcoming unimaginable force, as an art of what is yet to come.

The concept of magia naturalis, natural magic, has been developed by Renaissance humanists and expresses the heretic notion of creative acts produced by natural forces and of nature itself as a creator. This concept is at the very heart of alchemy and astrology, while giving impetus to the development of natural sciences. The magical power of nature: uncanny figures, unimaginable forces, non-human desires.

Magia Naturalis, a meeting ground of complicities, coincidences and clashes, explores nature as force by way of fantastic philosophical acts and unexpected transformations of artistic media. It operates not so much with objects, acts or relations, as with a scope of intensities where ephemeral constellations and stark powerful lines flash forth. In this respect, the exhibition raises the question of cooperation: the agents, the subjects, the forces. The forces that animate concepts and (art)works.

Natural magic: an experimental possibility for creative intervention into the space-time coordinates of a singular system of relations, which sustains it on the level of a delicate, yet intensive meta-stability.

Phase I of Magia Naturalis will be presenting artworks by Bignia Wehrli, Marta Djourina and L, sharing the space of Boyan Manchev’s philosophical laboratory, along with a poem in progress by Vesselina Sarieva. The works exhibited will act both autonomously and heteronomously: as autonomous agents, yet also as symptoms in a process of multifold stimulation of the reflexive domain of creation along the line of experiment and investigation.

The common space of this encounter is founded on the shared desire for transformation of forms and the invention of new forms; of new techniques for their emergence. Suspended in time, it is a space that looks forward to the future: a trace of light of a matter yet to be.

Creation outside of creation.

The photographs I show in Magia Naturalis were made in Switzerland, in the village of Sternenberg (Mountain of the Stars, as it is called). The works are a "drawing with the light of the stars", made with an analog camera. This is the connection between them…

My own artistic practice deals with processes of visualisation and methods of capturing ephemeral actions. […] I am fascinated with the processes of translation and transformation and I treat them as doorways between signification and reality. Through such processes there is something – an act, a space, an idea – that is transferred into an uncharted territory and into imagination. Time and again, the artwork seems like nothing more than a collection of remnants of something else – a cryptic clue, a sign or a hint of a reality concealed within it. (Bignia Wehrli)

Sternenschrift shows seven paths travelled by Bignia Wehrli’s father in late summer 2012 over the course of his workdays making hay in Sternenberg, as recorded by a GPS device. In the winter of 2014, using a camera and a specially developed instrument — the star pencil —the artist traced these paths with the light of a star. Using long exposure, the tracks of the star imprinted themselves on the negative.

Sternenschrift injects an autonomous agency and therefore an autonomous will into an inanimate agent (or patient), thus opening a possibility for non-human actors to enter the stage of (aesthetic) production of meaning. In this operation, however, the substance of the human body—the subjective consistency—is not erased. It becomes a thing among things: a force in the maelstrom of cosmic forces, the maelstrom of blind elements mixed with the all-seeing power of the affect, which penetrates the darkness of the galaxies. (Boyan Manchev) 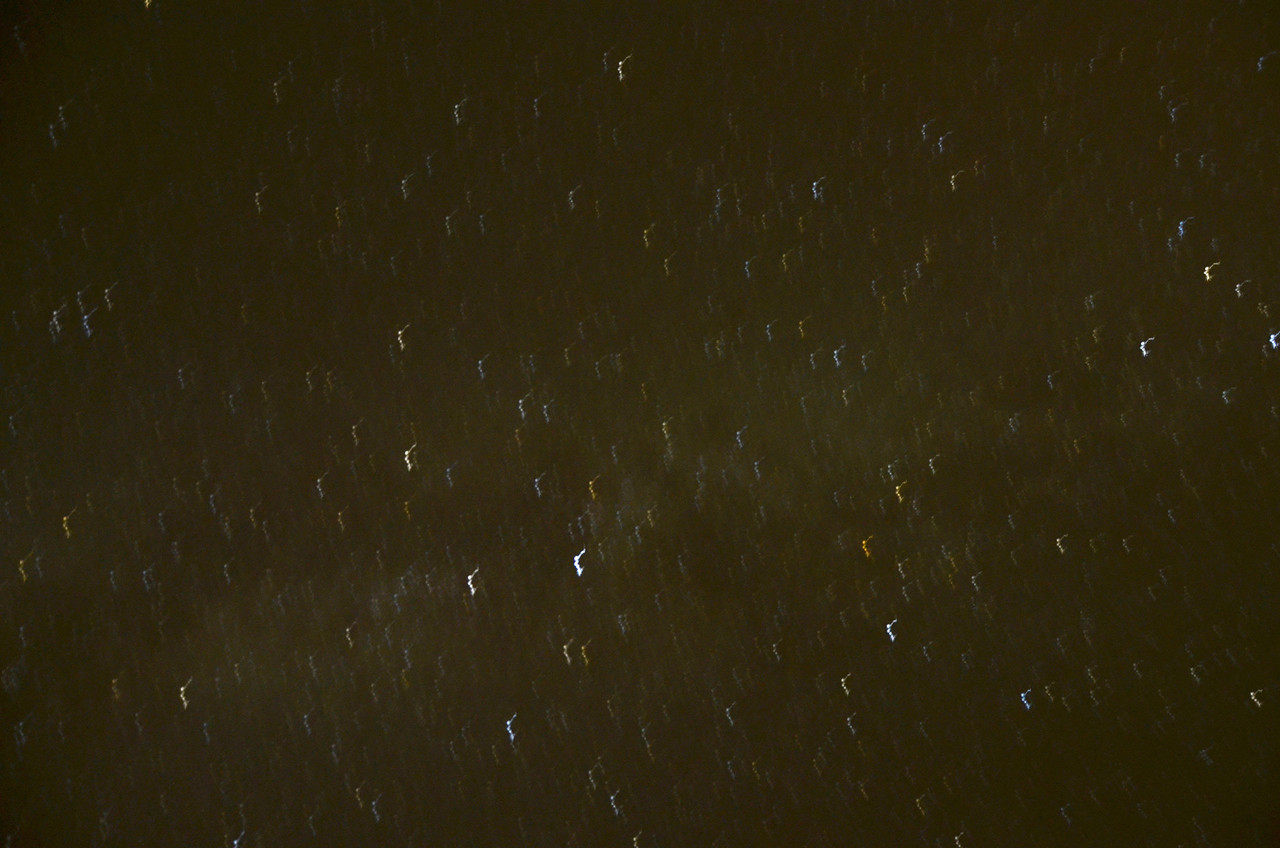 "Das Herz Bewegt die Sterne" ("The Heart Moves the Stars") is something as an artwork of a side effect. I realized that the shaking and trembling of my hand affected the photo. I saw that the rotation of the Earth also had an effect. The idea came to me to put the camera directly on my heart and stop breathing and just let my pulse move the camera. It was a short photo exposure, say, maybe about 30 seconds, but I was amazed to see that the stars, these little dots, seemed to be really moving ... I don't know if these are exactly the traces of my heartbeat, but it must have been that. It was a little miracle. (Bignia Wehrli)

Magia Naturalis – not so much an exhibition, as an artistic environment, a reflexive space and a reflexive time – sets itself the goal of introducing these problems into an experimental dimension. At the very heart of it is the fantastic question of the possibility of (creative) subjectivity beyond the bounds of the human subject.

In this respect, at the heart of this reflexive space is not so much the question of how we reflect on nature, how we creatively relate to it, how we refashion or transform it, how we invent or create it.

Quite the contrary, the question posed is: how ‘nature’ reflects on ‘us’. How it reflects on ‘itself’ through ‘ourselves’.

Does the track traverse the force, so that it becomes knowledge of itself?

What is the scope of (con)scientia?

How does substance reflect (itself)?

What does the nature’s desire imagine?

What do forces reflect on?

What reflects on us?

What creates? Does it create?

What does desire in itself desire? Does it desire?

In the obscure space of her laboratory, Marta Djourina plunges into an exploration of light as a guiding point to another type of liminality and the hidden power of biological bodies and organisms. The purity of the process and the unpremeditated results give rise to a symptomatic vocabulary based on color and visual analogies. Developing her investigations, Djourina transforms the photosensitive paper into a constructed body by creating photographic objects that explore the light’s possibility of overcoming space.

In my work, I deal with light and experiment with it. My works happen on the spot in the photo lab and comprise cameraless photography. In their nature, they are rather experimental. Using different sources of light, I leave light traces on the surface of the analogue photo paper, each project being based on the previous one and each work from the projects is also unique.

Looking for different sources of light, I discovered bioluminescency. In the project Glowing Attraction, bioluminescent algaes are the main protagonists. In the context of analogue photography though the algaes can unfold their expressionist potential: By shaking test tubes, where the unicellular organisms are cultivated in, the necessary impulse is given to observe the algaes producing light. Including a performative gesture the glow of the algaes is captured on the photosensitive paper, sometimes evolving into an explosion of yellowish, orange and red color blurs exchanging their size to a sun-like expression: The aesthetic result strongly resembles a glance into a source of energy leaving black spots behind because our sensual limitations aren’t able to perceive this strength. (Marta Djourina)

The project Untitled continues with the research of how the human body creates light and how it is possible to capture these happenings. Based on the accidental discovery by Semyon Kirlian that objects connected to a high-voltage energy source create an image on a photosensitive plate, this work series displays the electrical discharges of a fingertip onto a contact print. The sensitive surface of the paper is touched, in this moment energy unloads and is captured as an image. A bright, aura-like halo describes the position of the finger creating a strong black and white contrast to the pitch-dark background. In its essence this technique reveals a highly individual halo being as unique as the fingerprint itself. Various factors influence the appearance of the nimbus and transport in the context of for example alternative medicine information about the health condition of a person. The movement of energy through the body and the captured unloading on the paper happens in a controlled and staged process nevertheless the outcome is infinitely unpredictable. Through this technique unseen and imperceivable connections between objects, energy and light are combined and lead to this mystic testimony of secretive happenings we are constantly surrounded by. (Marta Djourina)

It is a photographic object, we can call it so, which was made by folding the photo paper and illuminating it from different sides, which is – thus the very picture we see on the surface of this photo paper is created. (Marta Djourina)

L’s material practice functions, in their own terms, simultaneously as a set of magic incantations, spells, totemic objects, everyday architectural and functional technologies, gateways to other dimensions, and sometimes as art. It is aimed at creating rituals involving active participants. This ritual process is also the basis of the open source spiritual community A.S.T.R.A.L.O.R.A.C.L.E.S., which acts “as an intermediary in the output of divinations and esoteric experiences”.

“A.S.T.R.A.L.O.R.A.C.L.E.S. is an exploration of the individual and the collective and the boundaries we place between those designations. In a philosophical perspective the current yet constantly evolving A.O algorithm privileges we over me, in an effort to achieve greater balance towards collective consciousness while also accepting the importance of our individual experiences and worldviews.” (L)

Astral Oracles + L's "Gold Cord = 999 portal" is a wormhole to the divine realm - 999D …Throughout the recorded and oral history of humans, there have been accounts of a silver cord connecting the body to the astral body when individuals astral project, or have out of body experiences. It functions as a lifeline and a grounding tether to the body while traveling through astral realms, and if severed, terrestrial death is almost certain. However unlike the silver cord which connects the terrestrial and astral bodies, the gold cord connects the cosmic body through all dimensions in and out of the illusions of space and time. (L)

In fact, in the centre of Magia Naturalis is precisely the attempt to transform certain techniques of thinking, grasping and depicting nature. In this case, these include mostly artistic techniques, but they also include poetic ones, as the included poem by Vesselina Sarieva, and philosophical techniques thatreconsider, transform and probably mobilise in another direction the proposed visions of nature and art. (Boyan Manchev)

Magia Naturalis is the new library of the New Athanor: Boyan Manchev’s experimental laboratory for philosophical fantastic. Magia Naturalis mobilises the hypothetical core of the philosophy of the (future) nature, crossing it with the anachronistic history of the idea of creating nature.

We hope that when the pandemic period, a potential Phase II will allow us to move on to more active modalities of Magia Naturalis’ initial concept. However, this remains a promise for the future.

“Suspended in time, it is a space that looks forward to the future: a trace of light of a matter yet to be.” Vesselina Sarieva and Boyan Manchev